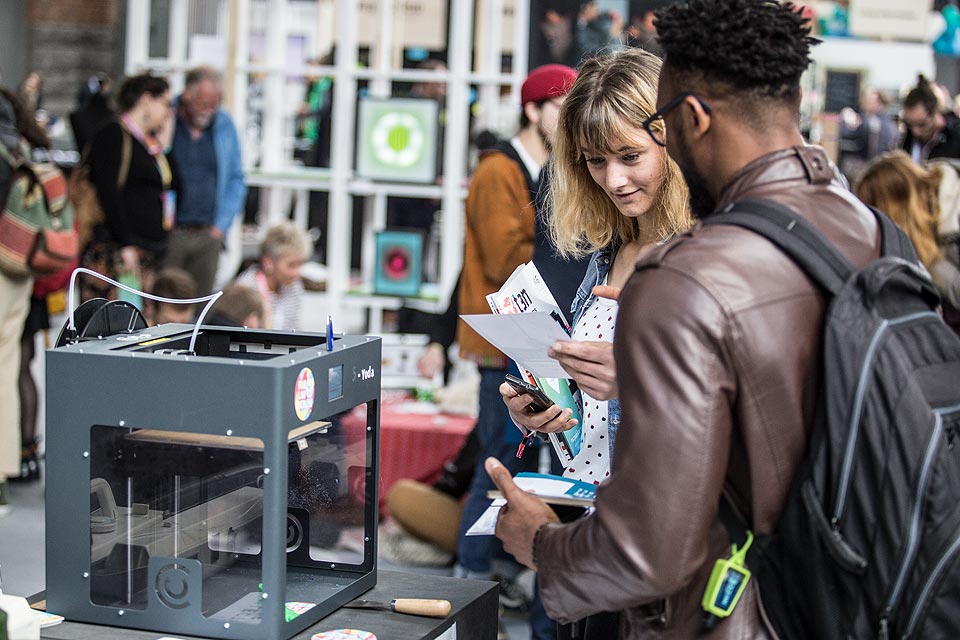 Berlin’s annual conference “re:publica” has finally grown out of its infancy. What started as a blogger-event with a high nerd factor has finally become a serious annual gathering of, let’s say, a variegated tech society. Founders, inventors, politicians, activists and journalists met to present, network and discuss. While this year’s motto “Love out Loud” focused on the rise of internet hate speech, the spreading of fake news and how to deal with it, other tracks like “business & work” and the “global innovation gathering” brought together makers, hub managers and entrepreneurs from around the world.

As a re:publica attendee you always face a major problem: A day has just 24 hours. During the three-day event over a thousand of speakers present hundreds of sessions. Logically many of them at the same time. While some are filmed and can later be reviewed online, one still really has to make a good plan for where to attend and what the alternatives could be, if one session doesn’t turn out to be as promising as expected.

With almost 8.000 visitors on just 23.000 square meters it can become quite packed and you’ll find yourself sitting on the floor. Another good reason to dress casual, as is common here.

But it’s not always the panels with the huge audience that are noteworthy. Within the business & work track of re:publica the panel “Makers & Mittelstand. How can 100 year old companies and the maker movement play together and where do they clash” emphasized on the different cultures between the maker scene  and classic Mittelstand-driven companies and how they could overcome obstacles and find their way to a fruitful cooperation.

German Mittelstand, what’s so special about it? Alongside the big corporations, there is a vast number of small and medium-sized companies in Germany. They provide a large number of jobs and are extremely productive. These companies make up what is known as the “Mittelstand”. According to the Federal Ministry for Economic Affairs and Energy, more than 99 percent of German companies are SMEs. In absolute figures, more than 3.6 million companies, providing more than 60 percent of all jobs in Germany.

In a refreshing gender equal formation – unfortunately not a matter of course in this field – panel host Ange Royall-Kahinn from WATTx, a Berlin-based company builder specializing in identifying promising IoT-inventions, Investor Jan Borgstädt, Managing Partner at JOIN Capital GmbH as well as Teshia Treuhaft, Head of Sales & Partnership at Senic GmbH, maker of the “Nuimo” smart home controller and Daniel Heltzel, Managing Director of the Fab Lab Berlin teamed up to discuss the issue of how to bridge cultures, manage expectations and finally strengthen technical development between the constantly growing maker scene and SMEs in germany and beyond.

Teshia Treuhaft emphasized the big chance Germany has these days with the maker movement. This maker scene is much more developed in germany than for instance in the US where usually the big tech inventions originate from.

Daniel Heltzel defined a maker as someone who bypasses conventional industrial means of production. Someone who has a very pragmatic approach to product development. Heltzel noted that the intention of makers has shifted in the past from those who fiddle with technology for fun to those with a more professional approach. At the Fab Lab Berlin many makers are working on inventions with the aim to bring a product to market, he stated.

The Maker Movement has grown significantly over the past 3 or 4 years. It has also become more international. (Daniel Heltzel, Fab Lab Berlin)

“There is quite a lot of prototyping infrastructure especially in Berlin,” noted Heltzel. However, the large number of hubs are “a little bit inflationary”. Having the aim to bundle resources, too many hubs foil this effort. Also, Heltzel pleaded for a better cooperation between makers and research institutions.

Jan Borgstädt stated to be a big fan of open platforms. In his opinion, they could need better sponsoring. “There are many accelerators that are being started by corporates. But those are usually given a specific theme which is linked to their individual strategies”, he adds. “But that is probably not a space where you would create crossfunctional new ideas”. In his view this apporach kills innovation since access would often just be given “if you already describe a product or a service that actually caters for that sponsor of that space.” Borgstädt remains skeptical of these kind of accelerators, because he suspects that they exist more for PR reasons. His recommendation, especially for the Mittelstand: “think about joining or co-sponsoring an existing space. It would cost less money, would be more innovative and you could test the waters. Send your own people in.”

Teshia Treuhaft gave interesting insights into Senic’s experiences on their journey from a protoype to a product. From their experience it takes about 9 to 12 months from a functioning prototype to a product that can be mass produced. Nevertheless, while working with a Fab Lab and their own studio they came to a point where they really needed expertise from Mittelstand companies. “When you move from something like 3D-printing to injection molding parts of your device, but may have a 2-month time of lag time when you are actually building that kind of mold, you need the insight that those Mittelstand companies already have. They did it hundreds of thousands of times.”

According to Treuhaft, the main challenge is not the prototyping itself, but turning a protoype into an “Amazon salable product”, as she pictorially noted. At Scenic they had to build up their own network of skilled companies by simply asking around. Finding one company that is experienced in printing circuit boards, another one that knows how to produce an equivalent glass for their device. “This is the biggest value from the start-up perspective of the Mittelstand companies,” she noted. “Because they are the ones actually making it.” What’s missing, adds Ange Royall-Kahinn, would be some kind of “centralized database” where makers and start-ups could find Mittelstand companies that match their individual needs.

“If you want support from Mittelstand companies, you need to be specific!” (Teshia Treuhaft, Senic)

Still it can be quite hard to find a Mittelstand company who is willing to invest even time to listen to what the makers have to offer. “You need to be specific, you don’t just go there and ask them things like ‘I need help to build a remote'”, Treuhaft added. She reported about one case, when they were trying to figure out how to have an LED matrix shine through the face of their device and the efforts it took to find the right company, that could solve this problem. “Show the Mittelstand manufacturers that you have an idea and care for your own product”, she added.

Mittelstand companies in germany are usually global companies, leaders in a very specific niche.  But how to reach them as a maker? Jan Borgstädt gives this advice: “You have to do the typical sales approach, call and ask for the decision maker. Usually they are a bit more conservative, but once they trust you, they are very thoughtful and give feedback. Mittelstand companies tend to have a long-term view and want to build long-term relationships.” Contrary to the big corporations who’d rather send you back to the drawing board when your product is not entirely finished. According to Borgstädt, Mittelstand companies are more likely to support you and going the final steps with you.

But there are more obstacles between the different cultures of the maker scene and the Mittelstand to overcome. “The first feedback we usually get from Mittelstand companies is, that they are highly worried about intellectual property”, added Daniel Heltzel. He is talking about the open co-working environment that is typical for maker spaces. Something that might give a Mittelstand company headaches. “We try to explain to them that it is actually a wide spectrum between giving away all your knowledge in an open innovation space and just bringing in selected input and getting selected output.” In his experience, Mittelstand teams often have to learn that they don’t lose a lot and can gain much more.

Patience is needed for a successful cooperation between makers and Mittelstand

When makers and Mittelstand meet, it is important that they both agree on certain expectations. “You should be well aware of the fact, that you might need to have a minimum of a three- to five-year relationship if you want to create interesting results”, Heltzel notes. Companies often tend to interest in having some short-term project-based relationships with a hub for half a year. In Heltzel’s view, this is not very promising: “We usually tell them it is an interesting offer, but we don’t want to create disappointments.”

Also “before talking to a Mittelstand company, you have to have an understanding what processes you need for your problem, and if Germany is really the right place for that”, Teshia Treuhaft states. In her view, when it comes to products that are based on sensors or beacons, Germany is definitely the first choice. “Most of the sensors are produced in Germany”. But there are certain consumer products, like a smartwatch or a smartphone, that “would be better off being made in China”, she adds.

Bearing all these pieces of advice in mind, it seems that the combination of innovative makers that partner up with experienced Mittelstand companies could be the key for Germany to finally step out of Silicon Valley’s shadow. Makers and Mittelstand seem to have completely different cultures. Cultures that might look contradicting on a first glance. But meeting somewhere in the middle, and understanding each others needs and expectations could be the key to a whole wave of new innovative products that not only originate in germany, but also are being produced here.

More panels can be reviewed on the official re:publica channel on youtube. 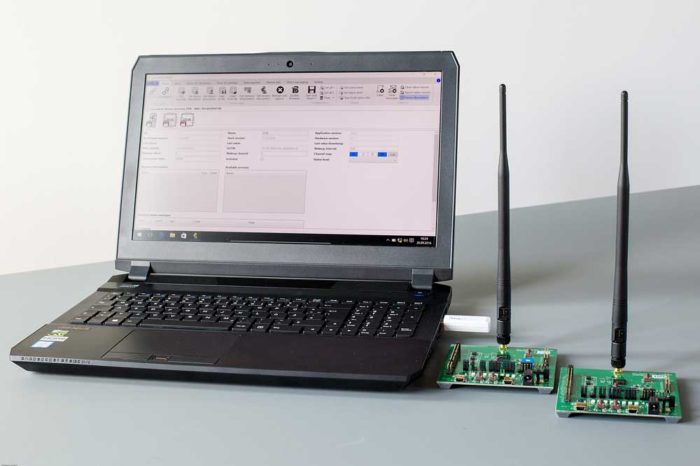 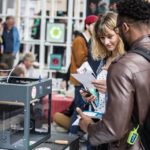