Interacting State Machines: how devices can learn to collaborate

One big challenge in the world of IoT will be to ensure devices from a range of different vendors to collaborate smoothly. One solution, and one that has proven the most popular up until now, is to connect each single device with a cloud service, collect the data and let a remote computer decide what to do next. But this is not always a very elegant way of doing things. First of all, you may need to tie in a number of gateways to collect data from the different devices which may all use different protocols. Secondly, by sending everything into the cloud first, you run the risk of higher latency. Thirdly, if the cloud server stops working or a glitch with the internet connection, the whole system may grind to a halt.

Many use cases wouldn’t even need to use a cloud service, if the devices could interact directly with each other.

Lemonbeat, as a member of the Web Of Things Interest Group of the World Wide Web Consortium has recently been talking about how this could work. At meetings in July at the W3C Face to Face meeting at Beihang University in Beijing or in September at the W3C Technical Planery / Advisory Committee Meetings Week in Lisbon, we were able to demonstrate using a model, how an intelligent aircondition system in meeting rooms could work. The model was presented during a so called “Plugfest”, an event where the designers of electronic equipment or software test the interoperability of their products or designs with those of other manufacturers.

A meeting room should offer a comfortable temperature of 23 degrees celsius when in use, but energy should not be wasted, when nobody is around. For the simple setup, three sensors/actuators are needed: An air-condition system (in this case represented through a desktop fan, a temperature sensor and a motion detector. All elements are from different vendors but are connected via Lemonbeat smart Device Language, an XML-based markup language on the application layer of a communications protocol. LsDL enables devices to communicate their statuses and make decisions based on the values exchanged.

When not in use, the system is offline. As soon as the motion detector detects people in the room, it sends this information to the airconditioning system. But instead of just starting to cool the room, the system first checks the data from the temperature sensor, to see if the actual room temperature is above 23 degrees. If this is the case, the airconditioning starts working. When the designated room temperature has been reached, the cooling shuts off.

One could of course ask „what is so special about it?“. Simply buy a modern airconditioning with temperature regulation and connect it with a motion detector. Case solved. That might work for a small office/home office solution, but when it comes to the professional sector, e.g. in equipping an office building with a modern aircondition system, a more flexible and scalable solution is needed. The Lemonbeat smart Device Language not only allows to change the rules in a setup even during runtime, but its also scalable for future needs. That means, an intelligent setup can be extended at any time with new sensors/actuators. A next step could be to connect the system with the meeting calendar. The system would know in advance how many people are being expected and the cooling could start minutes before the event to have the room ready when in use. A cooling system which takes all kinds of data (actual temperature, room size, amount of people in the room, expected arrival time) into account, would be not just very comfortable but could be extremely energy efficient.

In our video, Marketing Team Leader Edmund Barrett talks with Lemonbeats expert for standardization and product manager Frank Reusch who presents the demo-setup as shown at our various W3C Events. 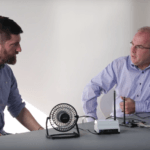 Interacting State Machines: how devices can learn to collaborate