With new ideas, new technologies and new smart products emerging every year, one big challenge for devices in the Internet of Things remains: How can we make them understand each other? A huge number of manufacturers and products using different protocols plus a wide range of platforms with non-interoperable networking technologies are making the IoT too complicated to handle.

The W3C as the main international standards organization for the World Wide Web, has launched a group to develop standards for what they call the “Web of Things”. Its goal: To counter the fragmentation of the IoT through standardized metadata, meaning data that provides information about other data, such as an description of the connected devices, and to enable an easy integration across IoT platforms. This should lead to a reduction in development costs, lessens risks for investors and customers, and could finally speed up the growth of the market for IoT devices and services.

Launched in the beginning of 2015 the Web of Things Interest Group provides a forum for technical discussions to identify use cases for a combination of the Internet of Things with the Web of Data. Since its commencement, the group has focused on gathering use cases and requirements, a technology landscape survey, architectural patterns, and experimental verification of the proposed building blocks through a series of so called “PlugFests”. 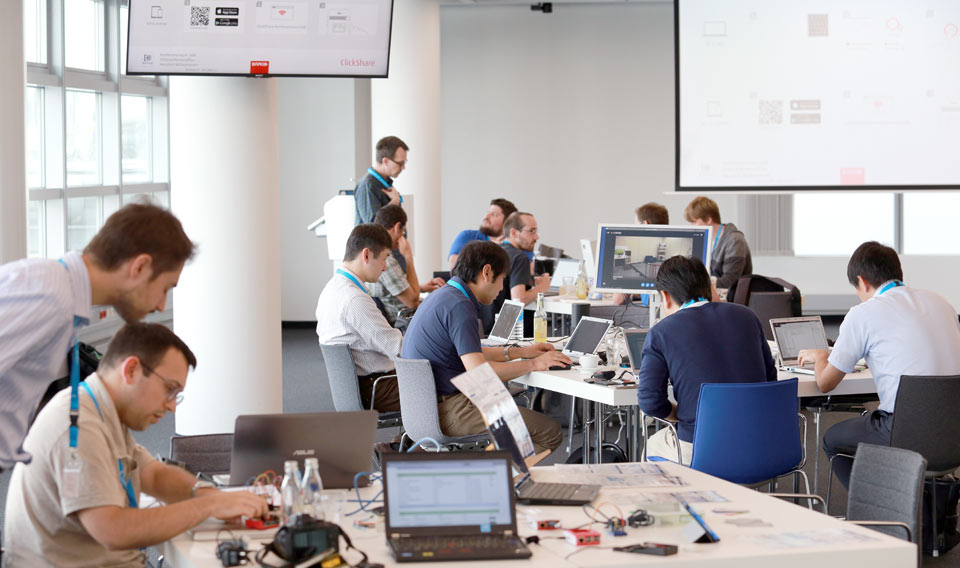 During the four day event the international teams from different industries work hard on a common description for devices in the Internet of Things. Photo: Dennis Knake, Lemonbeat

Meanwhile the discussions of the Interest Group have already shaped one preliminary Web of Things building block: the so called WoT “Thing Description” (TD). It provides the semantic metadata of a Thing as well as a functional description of its WoT Interface. The group defined a minimal vocabulary to express the capabilities of a Thing in terms of different interaction patterns: Properties, Actions, and Events. In addition, the TD provides metadata for the different communication protocols with bindings.

Between July 9th and 13th this year, it was time for another face-to-face meeting, traditionally in a rotating manner – this time hosted by W3C member Lemonbeat at Düsseldorf Airport Conference Center. There, developers and engineers of participating companies and institutions such as Siemens, Intel, Panasonic, Fujitsu, the Institut Eurécom, the Advanced Research Center of Electronic Systems (ARCES) of the University of Bologna, the Computer Science Laboratory for Image Processing and Information Systems (LIRIS) of the University of Lyon and Lemonbeat met to not just theoretically discuss further steps towards a common description of things, but also to practically test interoperability between individual setups.

Besides all the work, there’s always time for a picture of the team: W3C Web Of Things Interest Group. Photo: Dennis Knake

The first day was for the PlugFest. Here the focus lies on practical examples of IoT standardization: how do they work, how do they communicate, which protocols are being used and how best to address them via a Thing Description to enable them to interact with a demo case from another group? The findings made formed the basis of the various steps that were discussed at the various plenaries in the following days of the event.

Before the technical deep dive begins, the “Open Day” traditionally aims to invite external contributors to present the group with their perspective concerning the challenges they face with the Internet of Things. This time in Düsseldorf, Dr. Andreas Breuer, Vice President New Technologies/Projects from innogy SE, Michael Koster from SmartThings/Samsung, Juan Carlos Zuniga from Sigfox as well as Stefan Schmidt from BOSCH gave their individual insights.

What became apparent: it’s not just the interaction that is a major issue in the IoT, it’s also how to maintain and strengthen security within a network of connected devices. The Web of Things needs to enable end-to-end security across IoT platforms. This will require standards for security metadata as a basis for one platform to identify how to securely interoperate with another.

The Beijing PlugFest in July 2016 was a milestone for the W3C Web of Things activities as, for the first time, all envisioned building blocks came to life in different cross-company, cross-domain collaboration scenarios.

With the Düsseldorf Event, the Interest Group hopes to further develop an understanding of what is needed to standardize cross domain/platform metadata vocabularies and APIs and present the learnings as a specification in the immediate future.